DAIRY: ‘Blocka’ definitely wasn’t keen about being on TV — but actually found the experience empowering 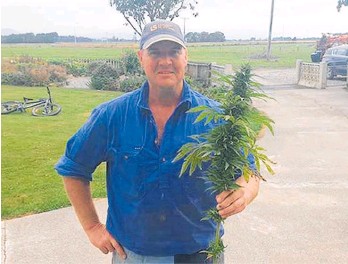 Being approached by Country Calendar could be considered the pinnacle of rural success but when the iconic TV show came calling, one Southland farmer wasn’t keen. In fact, when Country Calendar contacted Blair “Blocka” Drysdale three years ago, he turned the offer down. “When we first got approached … I was really anxious and nervous about doing it,” he told The Country’s Jamie Mackay. “Initially we said no for that reason — I didn’t really want to do it at the time.” Drysdale and his wife Jody are third-generation farmers on a 320-hectare mixed cropping and livestock farm in Balfour. In 2018 they diversified by including hemp in their farming operation and now sell a range of products through their own website, hopefieldhemp.co.nz. Apart from being anxious when the show initially contacted him, Drysdale also thought it was too early for the Country Calendar spotlight to shine on his hemp venture. “I really was prepared for complete and utter failure.” However, he eventually changed his mind and ended up finding the experience with the “awesome crew” extremely rewarding. “The safest set of hands you can ever find is the Country Calendar crew.” Drysdale was now keen for other farmers to answer the Country Calendar call. “There’s no need for that anxiety and nervousness when they approach you. They see something in you and what you’re doing [that] you may not see yourself. “I just want to encourage anyone that gets approached — don’t shut the door straight away. Have a good think about it. Actually — just say yes and get on and do it. “Don’t worry about what other people might think … it’s been a stunning experience for us.” The whole process had also been very successful, with the Hopefield Hemp website going “absolutely gangbusters” after the show aired, Drysdale said. “Everything has sold out so we’re flat out and we’re going to be all week, really — packaging orders and getting them out.” Although he was initially reluctant to open his door to Country Calendar, Drysdale now understood the important role the show held in New Zealand. Kiwis weren’t very good at celebrating success and Country Calendar was vital for sharing positive agricultural stories, he said. “There’s a lot of noise and publicity around negative agriculture and there are so many good stories out there still waiting to be told. “[The show] has a wide audience and a massive reach and it’s got so much traction — it’s so important to food production in this country going forward.” He had a simple message for any future Country Calendar farmer feeling a bit hesitant. “Don’t be afraid to say yes when they knock on your door.” ■