RED MEAT: In the 140 years since the frozen meat industry began, NZ has much to toast, and mull over, Sally Rae reports 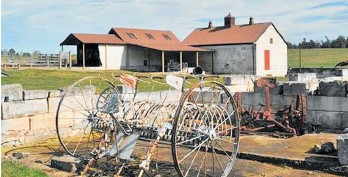 It is time to celebrate. That s the message from Meat Industry Association chief executive Sirma Karapeeva to all levels of the red-meat sector, as she visited North Otago, the birthplace of New Zealand's frozen meat industry. Karapeeva was in Oamaru for a function to mark National Lamb Day, the 140th anniversary of the first shipment of frozen New Zealand lamb arriving in the United Kingdom in 1882, and the centenary of the New Zealand Meat Board. MIA is the voluntary trade association representing NZ's red meat processors, marketers and exporters. She cited the likes of Silver Fern Farms and its zero-carbon beef, launched in the United States by Prime Minister Jacinda Ardern, as just one reason to celebrate. Processors had done “remarkable things” with operating their chains and businesses to keep going during the pandemic and Karapeeva was particularly proud of them. There appeared to be no end in sight to the supply chain and logistics issues globally. In March, chilled sheepmeat exports to the UK fell by 80 per cent year on year, reflecting the ongoing logistics with shifting chilled product. But there had also been a lot of positives from Covid-19, including a reconnection with wholefoods, including red meat. Before the pandemic, there had been a notion that alternative proteins were “going to be the saviour of the world”, but now people were questioning the ingredients going into those products — a “real positive”. Prices and demand were both strong at the moment but the labour situation was tough. “I can't overestimate how difficult it has been.” Processors had been resilient and done all sorts of “really interesting things” to retain labour, from adding shifts to longer shifts and paying above normal rates to attract and retain workers. However, the industry was competing in such a tight pool — “everybody's robbing from each other” — and it had been really tough. In April, Agriculture Minister Damien O'Connor announced the Government's previous border exception for 150 meat processors was fully subscribed and it was expanding the provision by 500 workers. But Karapeeva questioned how long it would take for Immigration NZ to process those applications. If they did not come for six months, then “what's the point?” A new team member at MIA was a workforce development strategist working on ways for attracting, training and retaining staff. Hopefully, she said, a new strategy would show Kiwis and the Government that the industry was investing in its workforce and that automation would not replace everyone. Projects being worked on to use artificial intelligence to do the likes of some meat inspector work would not replace actual meat inspectors, but augment and support their work. MIA strategy, trade policy and advocacy senior manager Esther GuyMeakin understood discussions had intensified regarding a free trade agreement with the European Union — NZ's fourth-largest trading partner with two-way goods and services trade at over $15 billion a year. The next few weeks would be crucial. MIA was working closely with with government departments to support those negotiations. “It's obviously an incredibly important agreement, particularly on the beef side — that's where the opportunities lie, [and] it's also where the most difficult conversations will be, too,” she said. “Hopefully, the EU puts their money where their mouth is and they commit to something that is high quality . . . and commercially meaningful for both sides. From what we've seen to date, I don't have a huge amount of confidence in that.” MIA was worried about aspects of the proposed fair-pay agreement system. Potentially, various incentive payments would be scrapped and she questioned “why would anyone be doing more than their neighbour next door?” While much was made about moving from volume to value, she questioned how that would be done without a productive, incentivised workforce.