Steam Inc puts on two trains trips of a lifetime 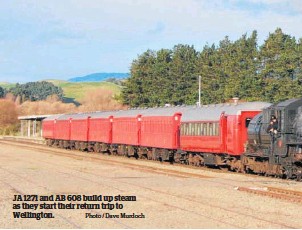 It was all puffing and blowing at Woodville Railway Station on Sunday, June 12 but it had nothing to do with the weather. For the first time in a week the sun shone and the day was calm as Woodville hosted two trains — one a steam train with two engines and five carriages, the other a heritage diesel with two engines and six carriages. That was a total of 500 passengers. It was Steam Inc’s 50th Birthday Excursion having been formed on this weekend in 1972 at Paekakariki on the Kapiti Coast. Over its 50 years, Steam Inc’s volunteers have restored a number of both steam and heritage diesel engines with an impressive number of the red-painted traditional passenger carriages. To celebrate the half century, Steam Inc organised two trains to travel from Wellington, both leaving at 7.55am together. The diesel train would travel on the Bush Excursion through the Hutt Valley and Rimutaka Tunnel up through Wairarapa and Tararua to Woodville, with a plan to arrive at 1pm, while the steam train would travel on the coastal route north through Horowhenua and Manawatu¯ through the Manawatu¯ Gorge to Woodville, arriving at 1.30pm. There, a highly efficient group organised by the Woodville Railway Station Trust catered for the 500 passengers with pancakes, sausages and heated boxed meals of butter chicken and macaroni cheese supplied by Tony’s Lunchbar in Palmerston North. The trust, formed in 2018, has done a wonderful job refurbishing the station to the point where it has hosted a wedding and a 40th birthday bash, with a Christmas celebration to come. All proceeds go towards further refurbishment with the focus being the replacement of the canopy. A number of stalls sold souvenirs and crafts including soaps, woodware, Ma¯ori arts, jewellery and clothing, all mostly locally made. A good number of visitors came to meet the train, some followed the train from Wellington by car, but others came to meet friends and family on the train. Alan Brabender came to meet his son Steve, who was driving AB 608 — called Passchendaele as it was built in 1916 at the time of the WWI battle. Alan retired from NZ Rail in 2009 after over 50 years as a steam train driver and Steve started driving steam trains in 2008. While the passengers and friends congregated at the railway station, the engines were turned around on the unique Woodville Loop so that they could return to Wellington. The two steam trains took on four tonnes of coal and a large volume of water to get them home. Passengers had the opportunity to swap trains for the return so they could experience both sides of the ranges. They were bound to have a good experience based on the first leg, with the weather fine enough to take in the spectacular scenery, the Manawatu¯ Gorge and Wairarapa — which seldom has a passenger train. Steam Inc says it likes to “provide the opportunity for young and old alike to experience the magic and nostalgia of steam travel to a variety of events and venues around the country”. It certainly did that last weekend.