Cycling trip an adventure of a lifetime 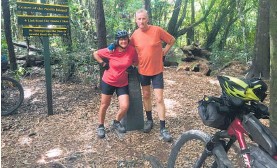 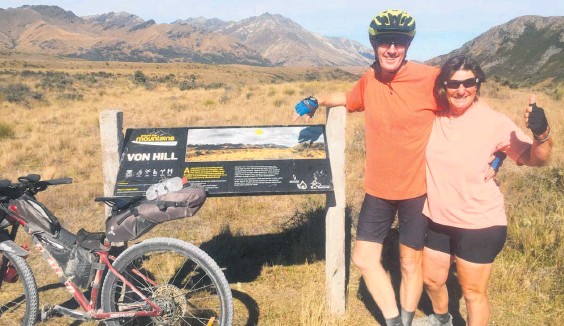 In the summer, waves of cyclists 10 at a time and up to 100 in number per day embark from Cape Reinga on an odyssey southward to reach Bluff in approximately 30 days. This trip can take place anytime of the year but summer is best. The trip is courtesy of Tour Aotearoa (TA) run by the Kennett Bros called “Bikepacking Cape Reinga to Bluff” and has been offered since 2016 when they decided there were enough trails and cycleways to make this trip safe for cyclists. On February 25 this year Sandra and Ray Cannon of Kumeroa were two to set out at low tide down Ninety Mile Beach on their 29-inch mountain bikes after a brief visit to the Lighthouse and 38 days later they reached Stirling Point Bluff. Their route, accommodation, food options and advice on great things to see were all part of the TA official guide for which each paid a $200 fee with the requirement to do something to reduce their carbon footprint, make a donation to a worthy cause and take photos of certain sights to prove they went there. Using a variety of sealed and unsealed roads, trailways, tracks and even small pieces of highway the route took them south to Auckland, through the central North Island to Taumaranui, south to Whanganui and down to Wellington via the Rimutaka Cycle Trail. Crossing on the ferry, it left Picton and travelled to Nelson, onward to Greymouth and south down the West Coast, traversing the Haast Pass to Queenstown and onward to Bluff. Each leg was about 100km per day and usually ended in a small town. The cyclists all had a GPS tracker which linked to a Map My Progress app so people could follow their progress. The official guide listed possible accommodation like motels, rural pubs, bush huts which Sandra and Ray could book in advance along with food options. The hospitality from these businesses was amazing and a highlight of the trip. For many small towns struggling to stay afloat financially, this regular flow of cyclists is a life-saver. Some even had “trail angels” who went out to cyclists with coffee and muffins, water melon and cold drinks. After six days Ray and Sandra recognised they could not complete the course in 30 days if they wanted to stop and view the scenery and other attractions. They averaged 15-18km per hour depending on the terrain which was pretty steep at times. The toughest was the Mangatapu Track between Pelorus and Nelson, the rocky unstable surface forcing them to push their bikes for 12 kilometres. One guy did the whole trip in 12 days, another on a unicycle, but Sandra and Ray were happy to take their time and enjoy the fabulous views and landscapes. There were some great highlights on the way, ferrying across Kaipara Harbour, jet boating down the Whanganui River and reaching the summits of trails like the top of the Crown Range and summit of Haast Pass. On day 38 Sandra and Ray travelled into a strong southerly to reach Stirling Point Bluff. Only on the first and last days did they strike a southerly wind, the weather otherwise being beautifully fine for the whole trip. They say the trip is the biggest adventure of their whole life, not for the faint-hearted and a real test physically and mentally but “an amazing experience they will never regret”. They trained for months doing circuits from their Kumeroa home — covering 2500km — before they embarked. The weather and hospitality of locals could not have been better and the friendships made will last a lifetime along with the memories.