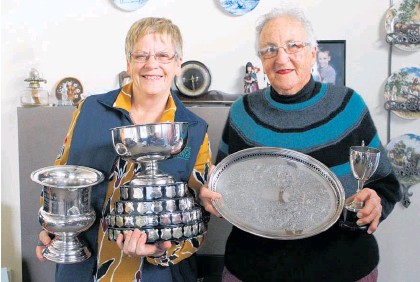 Every year the National Women’s Institute holds its conference and at the same time it holds its national competition. This year, the 101st Conference was held in Lower Hutt from May 3031 after a cancellation last year due to the Covid-19 pandemic. At stake in the annual competitions were 12 trophies which attracted more than 200 entries from the best practitioners of the crafts nationwide. Items entered had to have been created in the past year. Helen Monteith and Elaine Dougherty of the Tararua Federation of Women’s Institutes came home with four of those 12 trophies including the Eva Rennie Tray for best in show, won by Helen. Helen has been waiting for the day when she could enter in the over-80 competition and these nationals were it, submitting her fabric drawstring pouch which won the Edna Way Cup. To her astonishment not only was her pouch a winner in her age division but the judges assessed her intricate work as best in show. Helen was thrilled and says she loves her craft work, which originally helped fill in the hours between milkings on a dairy farm. She has been in the Women’s Institute for 48 years . Meanwhile, Elaine gained two cups, the Robert Young Cup she entered on behalf of the Tararua Federation and the Summer Cup on her own behalf. The Robert Young Cup requires three specific items to be entered representing a theme — this year it was Christmas. She submitted a Christmas stocking, a double-sided scrapbook page and a Christmas tree decoration, gaining two firsts and a second for her efforts and in turn won the cup for the second year in a row. Her second entry was in the “handmade book or journal of up to 20 pages incorporating a book-binding technique” category which again took out first place and secured the Summer Cup. Elaine says she loves her crafts and tries to learn a new one each year. After 49 years in the Women’s Institute she knows “quite a few”. Both women are already thinking about the next national competition and have gained a few clues as to its likely challenges from conference, but in the meantime the focus is to get ready or the local Tararua Women’s Institute Show in October where you will see the items which did so well nationally.