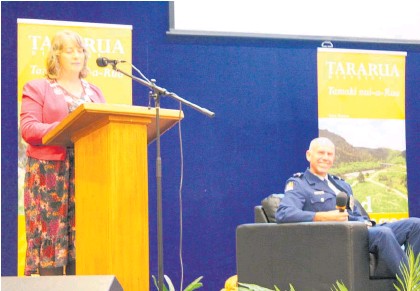 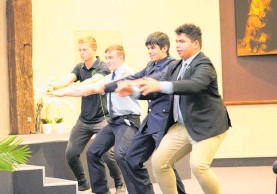 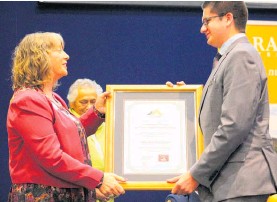 ‘There are adults out there living well because you cared,” said Sergeant Gary McKernon when it came time for him to talk about man of the moment, Senior Constable Wayne Churchouse, at the presentation of his Civic Award held in the Hub on June 10. A gathering of well over 100 met to support Wayne in an event this modest man was reluctant to attend but was relaxed about from the moment Tararua mayor Tracey Collis, as MC for the evening, introduced him, making comments armed with a microphone in a kind of This Is Your Life format. Those who provided supporting submissions each spoke of the impact Senior Constable Churchouse had on the community, particularly for his passion in creating and running the Cactus programme for the past six years. Councillor Sharon Wards, speaking for Rowena Bowie, estimated Wayne had helped more than 160 kids and had witnessed “life-changing moments amongst kids through his selfless acts of kindness from taking individuals out hunting to providing shoes and other gear”. Claire Chapman, from Tararua Reap, said Wayne “had the knack to help young troubled youth while keeping their mana intact”. Mary-Ann Anderson, of the Cactus Trust, said the reputation of Cactus was so strong among teens “graduation was almost a rite of passage”. Sharon Wards said she had “witnessed the young teenagers change from week one to week eight and if Wayne had not stood up for each they would not have made the progress they experienced”. As for the students themselves, one of the first graduates, Elizabeth Curtis, said Wayne “had helped her grow as a person”, another, Joel Dean, now training to be an officer in the NZ Army, said Wayne was a true friend and everything he strove to be as an NCO. Tama Ngati-Ruaporo, a recent top Cactus graduate, sang a special message in the song Fly Me To The Moon, which concluded “You are all we long for, please be true.” Reference was made to Wayne’s service beyond Cactus: ■ His role in the police since 1994, especially as youth aid officer. ■ His role in Land Search and Rescue as police liaison and Wander Search co-ordinator. ■ His participation in the NZ Army from 1998 to 2020 with postings in East Timor, Solomons and Australia. ■ His help with Victim Support, DHS Abel Tasman trips, the Dannevegas to Herby Four Wheel Drive Safari. Moana Beveridge, as his chief nominator, described many of the contacts she had had over 20 years saying she was “in awe of the man”. She presented Wayne with a book of all the pictures shown during the evening compiled mostly by his son Tiaki. Moana also paid tribute to Wayne’s family — his wife Api and his two boys Tiaki and Maia — who had sacrificed a lot of time with Wayne so he could follow his passion. For this reason, Mayor Collis chose to present to Tiaki his dad’s Civic Honour and to Maia the Cactus Trophy for Top Man, while presenting Wayne with the badge which signifies his honour. She thanked Wayne for “taking the whole community on the Cactus journey” and for “never being off duty when it comes to youth”. She said she looked forward to seeing his name on the Honours Board in the Council Chambers along with the other worthy recipients. In his right of reply, Senior Constable Churchouse thanked everyone for helping him follow his passion and the Tararua District Council for his Civic Honour. He particularly thanked Api and his boys, of whom he is very proud. He attributed his passion to help youth to his father’s advice: “To always do a bit extra without expectation of reward.”